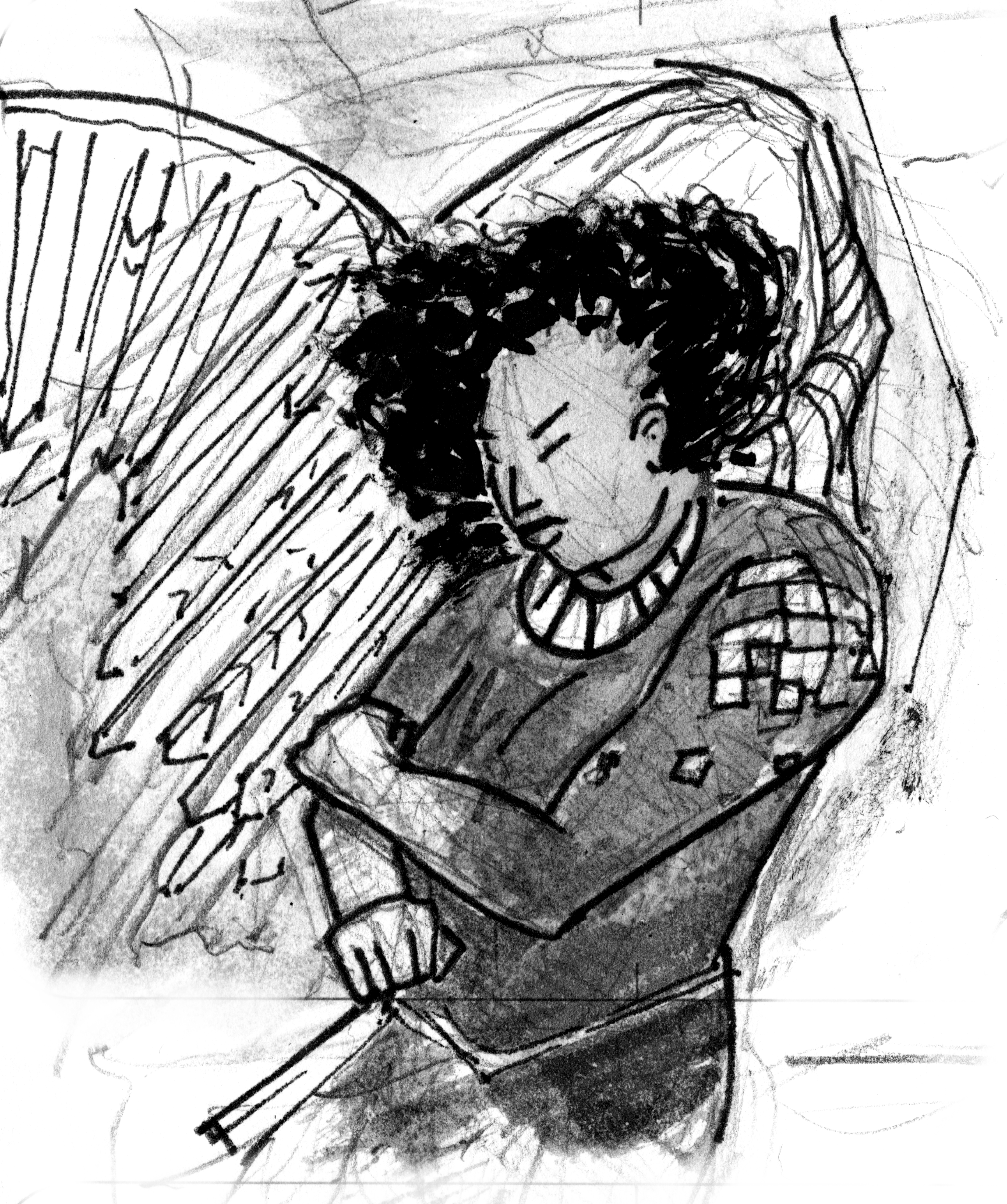 Minneapolis burst through the dark hardwood doors of the captain’s cabin and crouched on the floor, her wings a shield in front of her. She grabbed the electric baton at her waist and braced for gunfire.

Minneapolis looked through her feathers at the hunchbacked old woman behind the captain’s desk.

“Please get up, come over here, and sit down. Have a drink with me before we take this mozzie.”

“Never, Captain!” Minneapolis stood, her wings snapping behind her, a dull orange glow simmering within her feathers and her right hand clutching the baton. 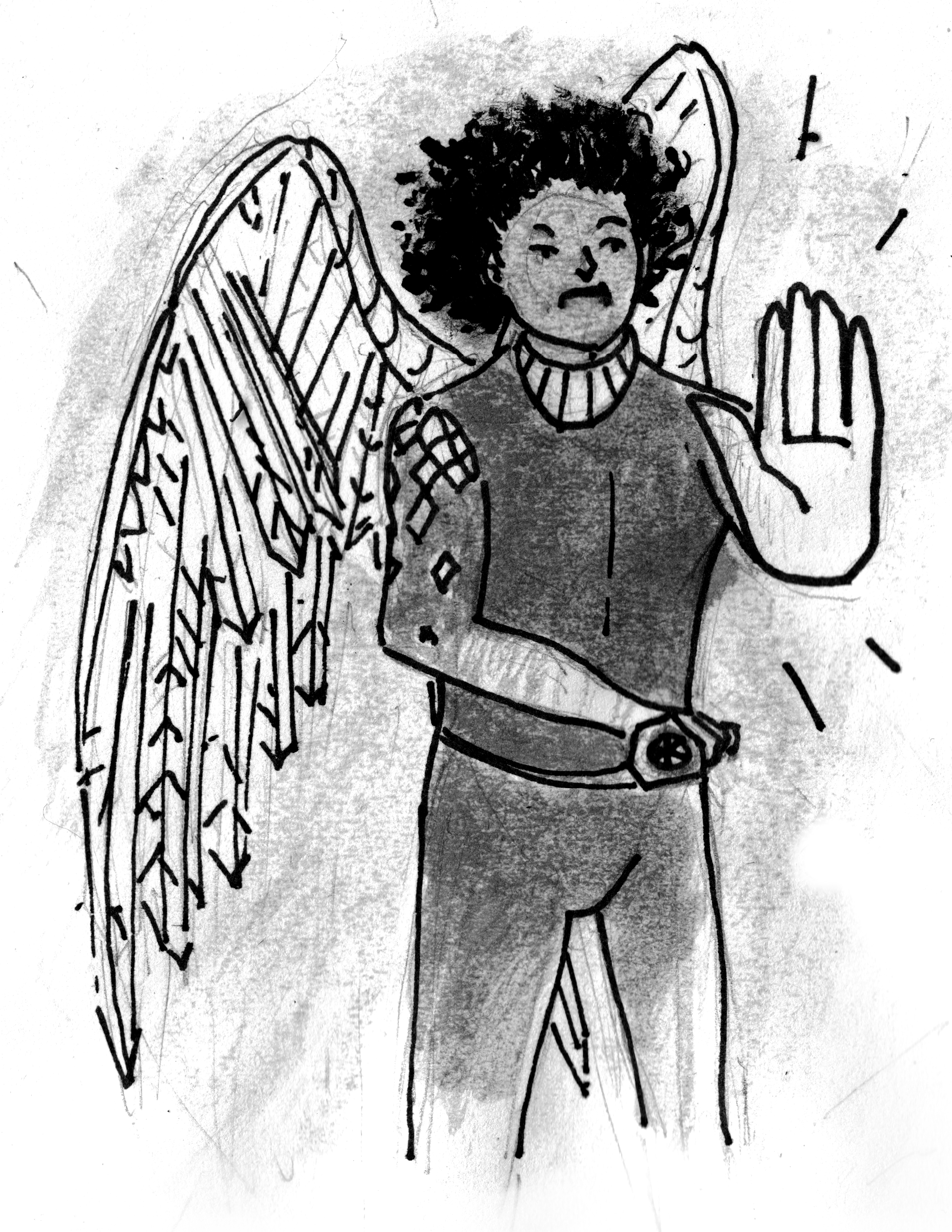 Through the window behind the captain, Minneapolis could see a Mosquito-class tanker sucking fuel up from the mantle of the trashmoon with its long stylet. Its body was swollen. Soon it would fly down to Earth and the fuel would be distributed by the Utopia Socialists of the North.

Unless it was intercepted by this old woman and her pirate crew.

The captain poured herself a glass of whiskey. “I’m sorry, Minnie, I shold have asked if you drank. There’s a jug of water on the cabinet over there, if that would calm you. Please do come sit with me, I could use another set of eyes looking at these plans.”

The captain took a drink and turned down to the schematics spread on her desk. Ways of entry to the tanker were circled in red, as were points of weakness. The estimated number of flykids necessary to take each position was writen in black ink.

Minneapolis slammed the end of her baton onto the desk. “You won’t need those plans. That tanker’s flying back home to earth, and you to prison.”

The captain grimaced and pushed her wheelchair back fom the desk. “When you barged in here I thought you were scared or excited about your first mozzie. I didn’t realize this was mutiny.” She pressed a button behind her. An alarm rang, blaring in the hall behind the doors and throughout the ship. A woman’s voice counted “T-30 seconds.”

Minneapolis laughed. “Even if your crew can take that tanker, I know they won’t escape without your cunning.” Another laugh, short and triumphant. “I’ve done it!”

“Quiet, girl,” the captain snapped, the wrinkles in her face looking harsh now, less careworn and more battlescarred. “You’re a fool, and I’m sorry for it. You fly well and take orders better, and it’s a shame to lose you in this pathetic attempt to stop us. Grab a helmet from behind you. I don’t want you to die today.”

The old woman fell from her wheelchair to the floor, landing on her hands and knees. Plastic bubbles rose up and covered all the furniture in a mere second, protecting the glass decanters on the drink shelf and the schematics on the captain’s desk. Under her cloak her hunch began to move, before the cloak flew against the wall, its magnetic clasp holding it fast. Magnificent and horrible wings spread from her back, almost as large as the room, beating twice and spreading with each. The wind knocked Minneapolis off her feet and blew her against the wall. The wings flapped strong again, and the captain rose from behind the desk, her face terrible in strength and ferocity. She balanced on her wings, one hand supporting her as the other grabbed first one than another helmet from beneath the desk.

Minneapolis had not moved from the wall, her face below. She had heard stories of what the early pteroplasty had looked like, but was completely unprepared. She had not even known the captain had wings, and now the old woman balanced before her and chucked a helmet at her face with arm muscles like cannons and pectorals like ancient armor. Minneapolis caught the helmet an inch from her face.

“Put that on, or you will die, and I’ll not mourn you,” the captain said.

“T-5 seconds,” came over the speakers.

Minneapolis put on the helmet. The captain put on hers.

The walls of the captain’s cabin opened. Air rushed out, taking Minneapolis with it, soaring away from the trashmoon, though gravity would bring her back and her wings were specially made to survive the trip.

Before her, the 80 flykids among the crew and the captain herself were falling towards the tanker. She had seen some of the younger pirates’ wings, but the full squadron was beautiful. Hundreds of colors, some scarred, some tattooed like a moth’s, some angelic or batlike. And the captain, wider than them all, magnificent and horrible.

She wanted to follow the captain, to soar with the crew and scavenge from the mozzie.

She wanted to bring them all to justice too.

She watched the captain and the crew land on the tanker in with horror and desire.

She shivered, clutched herself, and waited to fall back to the moon.